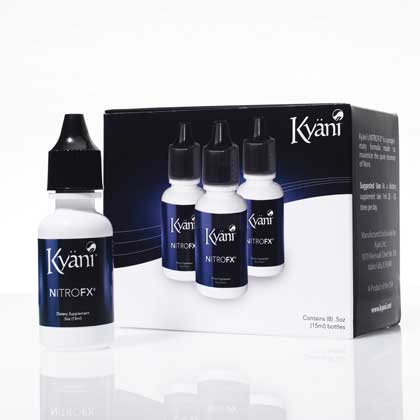 Kyäni Nitro FX™ is a concentrated blend from Noni fruit juice, which has been valued for its benefits for generations.

Kyäni Nitro FX™ is a concentrated blend from Noni fruit juice, which has been valued for its benefits for generations. Nitrates, found in plants like Noni fruit can efficiently produce Nitric Oxyde gas. This small tree in the coffee family grows throughout the tropical regions of the Pacific Ocean, from Southeast Asia to Australia. The plant blossoms generally near the sea and gives fruit the whole year round.

Nitric Oxide is abundant in the human body, but it is unstable and short-lived, and thus must be renewed continuously. With today’s fast paced lifestyles, poor diets and lack of exercise, supplementation to support Nitric Oxide production can be a good choice.

The Molecule of Life

In 1998, three scientist were awarded the Nobel Prize for their discoveries concerning “”Nitric Oxide as a signalling molecule in the cardiovascular system”” – a scientific breaktrough. Nitric Oxide is a gas with the chemical formula N-O.

It carries messages at the cellular level, able to efficiently penetrate cellular membranes because of its gaseous structure. In 1992 “Science” proclaimed it “The Molecule of the Year” and Nitric Oxide has been referred to as the “”Molecule of Life”” since the Nobel in 1998.

Nitric Oxide is abundant in the body, but it is unstable and short-lived, and thus must be renewed continuously.It can be produced efficiently from substances known as nitrates, found in plants like Morinda Citrifolia (Noni fruit).

(The product does not replace a healthy balanced diet!)

There are no reviews yet.

This site uses Akismet to reduce spam. Learn how your comment data is processed.